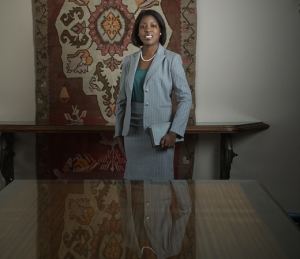 Leisa B. Lawson, an associate at Gold Weems, was installed April 9, 2013, as the 2013-2014 President of the Crossroads Chapter of the American Inn of Court of Alexandria-Pineville.  Leisa served this past year as the Crossroads Chapter Program Co- Chair.  The installation occurred at the Crossroad Chapter's Annual Banquet at which the Honorable Carl Stewart, Chief Judge of the United States Fifth Circuit Court of Appeals and current Vice-President of the American Inns of Court Board of Trustees, served as special guest and speaker.

The Crossroad Chapter serves Central Louisiana and was originally chartered by Judge F. A. Little, Jr.  Judge Little was a member of the Gold Weems firm until he was assumed the federal bench in 1984.  Presently, the Crossroad Chapter's Counselor is the Chief Judge Dee D. Drell of the United States District Court, Western District of Louisiana.  Judge Drell was also formerly a member of the Gold Weems firm.

Leisa is a 2008 graduate of Rice University and a 2011 graduate of the Paul M. Hebert Law Center at Louisiana State University.  She is a valued member of and will continue her work in the Employment Law section of Gold Weems.