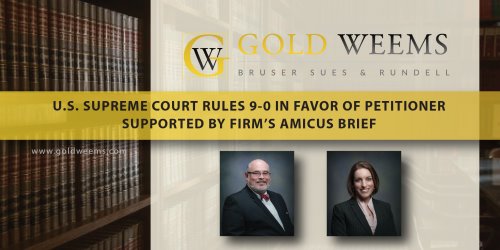 Firm attorneys, Bradley L. Drell and Heather M. Mathews filed an amicus brief in the U.S. Supreme Court supporting the reversal of the Fourth Circuit’s decision in Siegel v. Fitzgerald.  On June 6, the Supreme Court unanimously reversed the Fourth Circuit, holding that Congress’s enactment of a significant fee increase that exempted bankruptcy debtors in two states violated the uniformity requirement of the Bankruptcy Clause of the Constitution, Art. I, sec. 8, cl. 4.  The slip opinion is available here.

The decision marks only the second time in our nation’s history that the Supreme Court has invalidated a bankruptcy law for lack of uniformity. The decision also opens the door to challenges to the nation’s dual bankruptcy systems, which were the subject of questioning by multiple Justices.  This issue was the focus of the team’s brief, available here.

Bradley L. Drell leads the firm’s restructuring and insolvency group and is the architect behind the proposed class action.  Heather M. Mathews handles extensive briefing in the various courts and drafted the amicus brief filed with the Supreme Court.