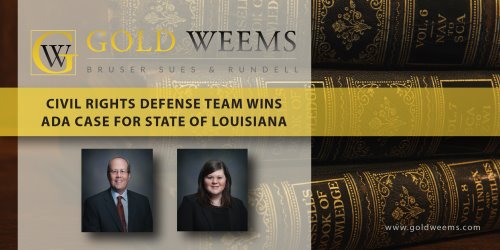 On July 29, 2022, the Firm’s Civil Rights Defense Team prevailed on an ADA claim filed against the Louisiana State Board of Examiners of Psychologists (“LSBEP”) and Jamie Monic ("Monic) in her official capacity as Executive Director of LSBEP.  M. Allison Johnson, who drafted excellent briefs and engaged in limited discovery, led the team effort and was assisted by Steven M. Oxenhandler.

In June 2022, Gregory Gormanous, Ph.D., an LSBEP Board member since 2018, filed suit against the LSBEP and Monic claiming the LSBEP and Monic violated Gormanous’s rights under the ADA by not permitting him to attend scheduled Board meetings via Zoom, a practice not otherwise allowed under Louisiana’s Open Meetings Law following the expiration of Covid-related more permissive rules.  Gormanous claimed his medical conditions did not permit him to attend Board meetings in-person, and provided a physician’s note in support. In response, Monic denied Gormanous’s request and provided a series of reasonable accommodations to Gormanous, which would limit his direct contact with other Board members while attending Board meetings in person.  Subsequently, Gormanous filed suit in Federal Court seeking preliminary and permanent injunctions allowing him to attend meetings by Zoom.

On July 14, 2022, the Court, in a well-reasoned, comprehensive opinion, rejected Gormanous’s ADA claims and denied his Motion for Preliminary Injunction, finding that reasonable accommodations had been offered by the Board and that Gormanous would not prevail on the merits of his ADA claim.  Thereafter, on July 29, 2022, Gormanous dismissed his claims against the LSBEP and Monic, with prejudice.  Ms. Johnson’s legal acumen and writing skills resolved this matter in favor of our client in a timely, cost-effective manner.

See the pertinent decisions below: