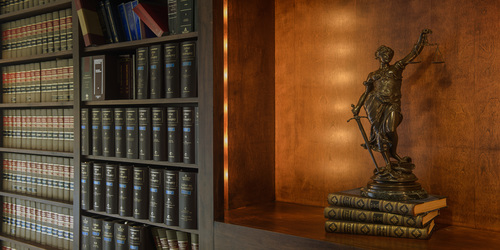 In a case involving “service animal” claims under the Americans With Disabilities Act and the alleged use of “excessive force” prohibited by the Fourth Amendment to the U.S. Constitution, Gold Weems attorneys Steve Oxenhandler and Allison Johnson successfully defended the City of Alexandria and two of its police officers.

On July 22, 2017, Linda Wilhelm and her claimed service animal, “Vito,” a 150 pound Mastiff, went to a local Alexandria bar - Buds and Suds.  After entering the bar, the owner asked Ms. Wilhelm to leave the premises, which Ms. Wilhelm refused to do.  The owner called the City of Alexandria Police Department, and Police Officers Voorhies and Helminger responded.  Fortunately, both officers had and activated their body cameras to record the entire incident.  After politely asking Ms. Wilhelm to leave, she at first refused but then relented. Ms. Wilhelm subsequently filed a Complaint against the City of Alexandria and the individual officers for violating her rights under the Americans With Disabilities Act, including relating to a service animal and excessive force against the individual officers, in state court.  The Gold Firm’s municipal civil rights defense team led by Steve M. Oxenhandler and M. Allison Johnson  removed the matter to federal court.  After discovery, they filed a Motion for Summary Judgment seeking dismissal of all claims.  In a very well-reasoned opinion, the Magistrate Judge granted the City’s and the officers’ Motions for Summary Judgment, determining that Vito was not a service animal but a therapy dog, which does not fall under the protection of the ADA.  Likewise, the body-camera footage showed unequivocally, the officers never used any type of excessive force.  Attached are the Report and Recommendation and the Judgment of the United States District Court.